Drawing History Into the Mystery

It's no secret that my Family History Mystery Series deals with a mix of current and past crimes. Sleuth Digger Browning is an avid family historian living in the Western Maryland mountains.

I've enjoyed learning more about the region's history, but had to do much of it remotely because the entire series (so far) has been written during the pandemic. I lived in Maryland (near DC) until my early forties, and have often driven or taken the train through the Appalachian Mountains. (Called the Allegany Mountains in some areas.)

Driving brings vistas of farmland and scenic overlooks. The train goes through the forests, along rivers, and into small towns. Those train rides drew me into stories.

For the third book, Mountain Rails of Old, I wanted not just personal family histories as a theme, but some aspects of local history as well. I drew in some of the Civil War time period and a role for the Underground Railroad. 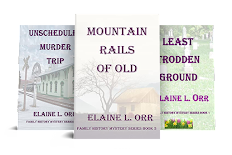 Maryland was a  border state, and a lot of people don't realize Lincoln's Emancipation Proclamation didn't apply to border states such as Maryland and Delaware. The president didn't want to risk having them secede. Slavery was most common in southern Maryland, where I remember seeing huge tobacco barns as a very young child.

Nonetheless, the Western Maryland mountains lead into Pennsylvania and West Virginia, and Pennsylvania was a state to which a lot of escaping slaves fled. Thus, the idea of a possible Underground Railroad Station near the fictional Maple Grove. It's not a major element of the story, but I learned a lot weaving in those components.

As the June 30th release date approaches, I find myself more excited about this book than many others. Could be because it's set in my home state, could be because this summer I'll finally get to do some on-site research. I've been fortunate to find some excellent books, but it's not the same as visiting the locale.

I'll be looking for ideas for book four.