What We Writers Try to Achieve

Recently, someone asked me why I work so hard to produce books. I inferred that the question also implied "at your age."
We authors write for varied reasons -- to get ideas from our brains to paper because we simply have to, to entertain ourselves and others, to make a living.
I wrote 'stuff' for decades before I decided to get serious about getting books to readers. Thankfully, I have an obsessive compulsive nature, so once I started writing books I wanted to finish them.
I don't write much beyond genre fiction, but I read, and learn from, a lot of literary fiction. There is no precise definition of a good book, but I think Ernest Hemminway nailed it.
"All good books are alike in that they are truer than if they had really happened and after you are finished reading one you will feel that all that happened to you and afterwards it all belongs to you: the good and bad, the ecstasy, the remorse and sorrow, the people and the places and how the weather was.  If you can get so that you can give that to people, then you are a writer."
Ernest Hemingway, "Old Newsman Writes," From Esquire, December 1934
One can always aspire.
*             *            *            *

When I decided to merge my love of writing with  that of digging into family and local history, I wanted to be sure I didn't delve too deeply into the "how to" aspect of exploring family history.

It didn't take long to figure out there is only so much license to take when exploring the history of a real place, in my case Garrett County, Maryland. I love riding through the Appalachian Mountains in a train. Or the Allegheny Mountains, if you prefer. While the town of Mountain Grove is fictional any references to the county's history has to be largely accurate. If not, why set it there?

With the Family History Mystery Series, I also faced the challenge of learning more during the COVID pandemic. A planned trip to tour some towns and conduct research fizzled, and I felt fortunate to find publications through the Garrett County Historical Society. 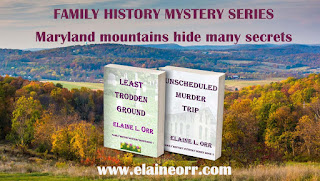 As always, the characters made their preferences known. I had planned for the protagonist, Digger -- you'll never guess how she got her name -- to spend more time plowing through old records and such, but she decided that would be boring.

She also wanted more friends, so the Unscheduled Murder Trip gives them a bigger role. Book Three, tentatively titled Mountain Rails of Old, will feature the family of Digger's business partner, Holly. She's descended from one of the first free Black families in Garrett County, which will give me a chance to explore more aspects of the county's history.

In my wildest dreams, I never planned to insert a ghost, but one of the key characters was too good to let rest in peace. Writing does take authors down unexpected paths.

Are You a Closet Outliner?

Other than fully outlining one book in 2006, I generally start with an idea, make some notes, and start writing what I think will be opening scenes. Then I pause and make more notes, eventually creating a chapter summaries document. As the name implies, I use it to track what I've done and plan future developments.

It might be better if I fully outlined at least the murder and how it is solved. I simply have trouble keeping my fingers off the keyboard.

As I finish one project I thumb through notebooks to see what else has been in my brain. I lose thoughts unless I write on a card and staple it to a notebook page or write thoughts directly in the book. Usually I can decipher what I meant. Sometimes not. 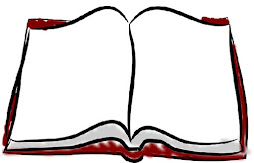 As I shipped the Unscheduled Murder Trip to the proofeader, I began the note review. What I look for are the half-baked (excuse me, half-developed) ideas that I jotted so I didn't lose them. Because I also make notes on books underway, I see I'm more of an outliner than I think I am.

It's About the Villain

Four basic points are always in my lists.

What's most striking (even to me) is none of these points relates to the protagonists and how they solve the crime. Of course I have notes about this, but they are not in the core list. Why? Because any mystery starts with the killer/kidnapper/ embezzler's motive.

In a thriller, readers may know the motive up front because the author puts readers in the minds of the perpetrator and the hero (who sometimes seems to have almost superhero talents). Much in these books deals with how close the villain comes to blowing up a damn (or whatever) before s/he is stopped. I read many thrillers and love them.

However, my own writing tends toward solving the puzzle -- it's only possible when the sleuth can unravel the culprit's motives. But that comes near the end. In one memorable (to me) thought process, I changed the killer after I finished the first draft. The new murderer had a stronger motive. It's one of my best books, but I don't recommend the process.

The crime and its resolution have to matter to amateur crime-solvers. Otherwise, they're simply busybodies or folks with too much time on their hands.

There has to be a reason the sleuths can solve the crimes when professionals can't. The killer may discount their abilities and thus reveal something that sends the sleuth down a path. Maybe they have tremendous resources and can buy a $1,200 airline ticket and hop on a plane to keep an eye on the bad guys.

Another option is to do something illegal (hack a computer, bug a phone) that police can't do without a warrant -- or at all. However, the reader has to feel sympathy with the sleuth's methods. I stopped reading one series because I thought the sleuth's actions (in the last book I read) were as unacceptable as the criminal's.

Your Questions May be Different

All the ads for fad diets say something like "results may differ for individual participants." Same goes for how you develop a book. Any approach works, as long as it's a conscious endeavor.