Spread the Word with Hashtags

No, not the kind of hash your grandparents swear they were happy to eat when they were kids. These have no taste.

Twitter, the 280-character communication tool, is a boon and a bane for authors who want to publicize a book. Even if they buy into the idea of tweeting a link to a book, it takes a long time to get a lot of Twitter followers (aka fans) who will read the tweets.

And then there is the time-suck element. Can tweets lead to higher sales or just take time away from writing? The answer is yes and yes.

First, a definition. Hashtags.org says that "a hashtag is an easy way for Twitter users to categorize Tweets that share a common topic or belong to a particular group. The hashtag is used to highlight keywords or topics within a Tweet, and can be placed anywhere within a post."

Basically, when you put the number sign (#) before a word/phrase, people with this interest see your tweet.

If the right audience reads your tweets sales may go up a bit, but there are a lot of variables. First is how to reach people who might like a book, which is where hashtags come in, and second is timing.

Which Hashtags to Use

While you could make up hashtags, there might be no recipients. To know if a certain hashtag exists, type it in the search box that is just above the tweets received (the box with the little magnifying glass). For example, type #mystery or #mysteries to see if there are people interested in those topics. (There are.)

A hashtag will likely exist for anything you think of. If not, you can create one by following instructions on  hashtags.org. It takes time for a hashtag to get many followers, so initially find ones that are similar to your interest. For example, a woman is the protagonist of the Jolie Gentil series, so I initially checked #womensleuths. Later I found #femalesleuth and #womansleuth. Plural versions often exist. I send tweets to all of these hashtags from time to time.

Hashtags count against the 140 characters you can have in a tweet, but the links to sites do not.

Samples for Writers at Work

Samples to Publicize Books or Articles

Genre-specific hashtags generally help promote a book more efficiently, but if your work crosses genres or you think everyone wants to read your book (dream on), try those below. Make sure the link corresponds with the hashtag--use the BN link for the #nook hashtag.
#fiction
#novel or #novels
#goodread or #goodreads
#ebook or #ebooks
#nextread
#bynr (which stands for be your next read)
#mustread
#bookpromo
#kindlebooks
#kindle
#nook
#kobo
#smashwords

There are hashtags for every genre. I write mysteries, sometimes with a touch of romance, so these two genres are highlighted here.
#mystery
#mysteries
#crimefiction
#mysterylovers
#femalesleuths
#womensleuths
#cozies
#crimefiction
#hardboiled
#mysterywriters
#mysteryreaders
#crimedrama
#thriller
#suspense

Consider staying away from general terms such as #crime or #cozy, which go to more than readers. If your mystery is not a thriller or hardboiled, stay away from those hashtags. You won't snag more readers by targeting an uninterested audience.

Some of these are general, others give you a way to get started in genres other than mystery or romance.
#youngadult  or #youngadults
#newadult or #newadults
#lowvision (for audio books)
#audiobook or #audiobooks
#beachread
##bookalicious
#series
#fantasy
#westerns
#scifi
#sciencefiction

If you use these hashtags (or those for any other country) make sure the link to the book is the Amazon (or other) site for UK buyers.  Amazon has a list of all its international sites. This matters because, for example, a German reader cannot purchase a book at the Brazil Amazon site.

One hashtag can lead to others. If you go the the list of tweeters who get the #mystery hashtag there may well be similar hashtags in the tweets you see.

...really is everything. While there are night owls, more people see a tweet during typical waking hours. Maybe that means more sales, maybe more sales come when fewer people are awake at night and they don't see as many tweets. Whatever you think, it's probably best not to do all tweets at the same time every day.

People generally see only a few of the tweets that come to them--those that come while they are looking at the screen. After posting a tweet, the screen will soon say how many have been posted in the next half-minute or so. That could be 150 or more! I send similar tweets to the same hashtag every day or so, because almost no one will see the same tweet twice.

And speaking of time. Let yourself have ten minutes a day for tweets. Perhaps more if there is a new book. If you keep a list of hashtags and copies of 140-character tweets, it's possible to send dozens in ten minutes. More than a few minutes a day and marketing tweets can detract from writing.

Here are a couple of my samples.


#author #writer I donated books to libraries damaged by Sandy and you can too. For indie authors. Well run effort. www.ksbrooks.com/AuthorsforHurricaneSandyLibraries.htm

Unless you construct elaborate tracking scenarios that are linked to your books (not!), there is no easy way to judge impact except in the broadest sense. I can say that, as a self-published author, I had no international sales until I started tweeting. I have fewer overall sales if I stop tweeting for a few days. That's good enough for me.

Many of my tweets deal with the Jolie Gentil Cozy Mystery series. You can learn more here.
Posted by Elaine L. Orr at 11:22 AM 2 comments:

From mid-July to mid-August I focus on several family history projects, notably updating a publication about descendants of my Irish grandparents and keeping the Orr family web site current. (www.orrreunion.com)  A few years ago I accepted the (self-imposed) challenge to gather hundreds of stories about thousands of close and distant cousins, and to try to tell a cogent tale.

Success is in the eye of the reader, but I did see a number of common elements in the diverse families. For example, widely dispersed family members worked in mining at the end of the nineteenth century and beginning of the twentieth. Some were in the Pennsylvania coal mines, others in the strip mines that dotted states such as Kansas. These shallow coal deposits also became the reason many farm families had heat during the Depression.

While mining was not work that these families did in Londonderry, milling was. Two rivers ran through Aghadowey Parish (similar to a county), and one early history of the Orrs of that area says that my fourth great-grandfather had "a mill on the Reaf." It took awhile for me to associate his work there with what many families did in Jasper and Greene Counties in Missouri--operate grain mills.  In Greene, the Likins Mill evolved into Polar Bear Flour, a fairly large firm. 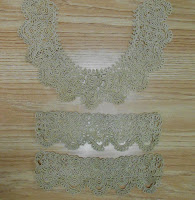 Mills were a place to congregate. Farm families that had little opportunity to see one another during the long months of sowing and harvesting crops brought corn or wheat to a local mill (always on a stream, which powered the mill).  During the day or two that the miller ground the crop into a usable flour or meal a family would often camp by the stream to socialize.

At the Adams Mill in Jasper County, the Adams family also operated a store on the site. They sold everything from food to fabric to farm implements. The photo at right is a set of lace collar and cuffs that was sold in the Adams Mill Store. The mill burned, and the store survived for a few more years. Minus the business that came from families waiting for their flour, widow Isabella Campbell Adams eventually closed the store as well. Today the woods have reclaimed the spot.

The far flung Orr relatives have congregated at the Ozark Prairie Presbyterian Church every August since 1937. The timing is no coincidence. Some crops would have been harvested, others were soon to be. What better time to gather?  While few of today's attendees have grown the food  they bring, except tomatoes and perhaps watermelon, we can all cook. When you look at the spread at left, you'll wish we were related. Yes, that's homemade ice cream. The brownies in the foreground were my contribution.