Nearly all of us keep in touch with one another through social media. It's fun, and the geographic distances melt away when we look at pictures of an adult child's birthday celebration or college roommate's report on a new job.

While some people use these communication tools for insults, most are respectful. A lot of people do as writers do and find ways to connect with kindred spirits in meaningful ways. Why writers? Because we not only work alone, we don't have a group of nearby colleagues. Or most of us don't.

I signed up for Twitter in 2012, but didn't use it much for a couple of years. What could be said in 140 characters? Why just 'put stuff out there' where you could talk to people or have more meaningful social interactions on other media?

It turns out you can reach people all over the world via Twitter. Some you eventually meet in the real world. My books had no international readers (that I know of) until I began tweeting regularly.

If you are an author who wants to meet readers and other authors, here are some Twitter strategies.

1) Set up an account with a brief statement that says something about books or your writing interests. If you want to talk about your favorite foods or grandkids, consider a separate Twitter account.

2) Pick a professional Twitter name, called a handle. It can be your name -- mine is @ElaineOrr55. A professional name doesn't have to be serious, but you want it to convey something about your work. A friend's mysteries are set in campgrounds, so her handle is @RVMysteryAuthor.

3) Promise yourself that you will post about more than "here is what I write" or "please buy my book." If you have nothing to say, you don't want to be absent for days, so post links to interesting articles or quotes from noted authors -- or others you admire. Stay away from controversial topics. That doesn't mean deny your values, it's simply a matter of staying focused.

4) Start a blog. Huh? We're talking about Twitter, aren't we? If you have a blog you can regularly send out tweets that link to articles on your blog. You'll be providing useful information, and a number of the posts can relate to your books, articles, or subjects you write about. My blog is called Irish Roots Author, and largely deals with writing and publishing. An index lets people search the now hundreds of posts. It's a lot of work to write a blog. I want the pieces to be relevant over time, so I tweet about them.

5) Keep those tweets organized. I have a ridiculously long Word document that has hundreds of prior tweets, organized by the book or blog post they refer to. A single book may have been the subject of hundreds of tweets through the years, because I focus on various aspects of the book or use different hashtags. (More on those in a minute.) I certainly don't scroll through past tweets -- I search for the book title, a holiday I referred to, or whatever piques my Twitter vision for the day. The Word document lets me reuse tweets instead of having to constantly compose new ones.


6)  Tweets have to be targeted to people with similar interests or they are just Internet blather. Hashtags (short phrases that start with #) draw people interested in those phrases. You see them everywhere now -- news stories, Facebook -- but they started on Twitter. The more specific the hashtag, the more likely you are to find people interested in your topic. Using the hashtag #mystery is probably too broad. Saying #JerseyShoreMystery could hit a more targeted audience, assuming you write, as I do, mysteries set at the shore. I keep lists of relevant hashtags, and wrote an (inexpensive) booklet of 500+ Hashtags for Writers. It can get your juices flowing

7) Be selective in who you follow. In a nutshell (you could write a book on this topic), there is no point in 'buying' followers, because they have no interest in your tweets. In fact, many of those 'followers for sale' ads provide large what are called bots (fake Twitter accounts).

Almost every day I look for people with similar interests and ask them to let me follow them. Sometimes their Twitter handles pop up on my screen as suggestions from Twitter, other times I search for a hashtag such as #cozymystery or #amwriting to see who comes up. People ask to follow you. I agree to most of these, but I'm careful not to associate with accounts that promote (for example) erotica or graphic violence via books. To each her own, but those aren't my interests.

8) A key point about followers: there is no point in following people who don't follow you back. When you click on a person's Twitter name, it shows the number of folks they follow and the number who follow them. They only see your Tweets if they follow you back. I don't bother following famous people -- other than a few authors I'm interested in.

9) Create lists of Twitter users whose topics interest you. I won't outline the steps to do this (Twitter has good help pages). Essentially, you group Twitter users by topics so you can refer to the lists of people who like the same kind of books, live in your part of the state, write blogs you like, etc. If I have a new book I may send some people on a given list a note about it. Twitter is not set up like email -- you can't send Tweets to specific groups of individuals. So while it can take a while to send these notes, it keeps all of us from getting spammed.

10) Consider joining a Tweet Team or two. Tweet teams are groups of people with a common interest who retweet one another's posts. You post a tweet, copy the address for the tweet, list that address on a team's Facebook page for that day. Then each person who does so on a given day retweets the other tweets. You need to join Tweet Teams that closely align with your interest -- too broad and you're wasting your time because you won't reach those who want to, for example, read your book. Tweet teams are valuable, but there is such a thing as too much exposure to the same Twitter users. 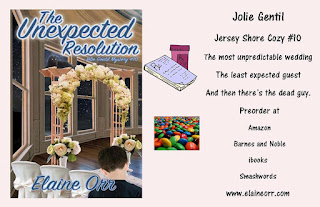 11) Tweets with images are read far, far more often. You can use book covers or learn basic software (Microsoft Publisher and an inexpensive photo program) to make graphics. Take pictures -- one of my series is set along a river, so I'll post pictures of the river. The protagonist is a gardener, so I post flowers. Here's a sample of a book graphic -- these take me less than ten minutes to make. It's all about having a system.

12) Have fun. You get a sense of people if you join a team or simply pay attention to tweets of those who write books like yours, have similar hobbies, or whatever. I've met several other writers at conferences -- good to put names and faces together.

13) Finally -- limit your time on Twitter. I try to do no more than 10 minutes per day, unless I have a new book or am plugging a couple of blog posts. Twitter is terrific, but far better is dropping by the library and talking to readers or grabbing a book.
*     *     *     * Check out Elaine's web page, sign up for her classes, or receive her newsletter.

One of my goals in writing the Jolie Gentil cozy mystery series has been to add a touch of real life to the books.

Jolie is a Jersey shore real estate appraiser who has the occasional misfortune of stumbling over bodies. She also heads the local food pantry, has homeless veterans as friends, and (when she can't get out of it) gets dragged to a 12-step meeting by her friends Scoobie and George.

Authors can't put 'messages' in their books – fiction is for enjoyment. However, unless you live in Alice's rabbit hole, we all deal with diverse people, some of whom who need a helping hand.

In the first book of the series, Jolie has just left an ex-husband who cleaned out her bank account, so she is largely focused on herself. A couple reviews noted that. I thought, “Good, they’ll enjoy how she evolves.” I hope they came back for more.

By the second book, she's been encouraged (or conned) into running the food pantry. The work does provide the opportunity for crazy fundraisers. She also develops friends of all ages and careers, including a couple who always bring a laugh. Some of those friends, especially high school buddy Scoobie, make some marked changes in their lives as the series progresses.

Book nine, Holidays in Ocean Alley, was the first (and I think will be the only one) not written from Jolie’s point of view. Novella-length, it’s told from the perspective of Aunt Madge and longtime friend, Scoobie. I especially enjoyed the chance to let Scoobie's humor shine through. 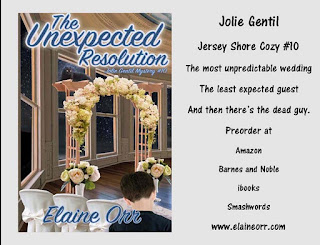 By the tenth book (preorder The Unexpected Resolution now, available July 25), many of her closest friends would not be part of her life if she hadn't moved back to Ocean Alley and been roped into running that food pantry. And the books sets her life on yet another new course.

I've been asked many times "what are cozy mysteries?" -- it's an occupational norm for those who write them. Essentially they are mysteries that feature an amateur sleuth, minimal violence and swearing, and usually a small town setting. The sleuth's profession or hobby is often an important feature.

Similar to traditional mysteries, the cozy term is a more specific identifier. Traditional mystery authors (Agatha Christie, Dashiell Hammet, Earl Stanley Gardiner, Dorothy Sayers, Louise Penney, Terence Faherty) are not 'gory,' but have detailed murder descriptions and (dare I say it?) more elaborate plots. Their protagonists tend to be professional crime solvers, though not necessarily police. I think of these traditional crime solvers as spending more time in their heads than protagonists in cozies -- or thrillers, for that matter.

If you'd like to listen to podcast discussions about traditional mystery authors' books, head to the Classic Mystery Backlist. There are many wonderful lists of the books, this site gives you an audio option. It's a wonderful resource.

I use The Cozy Mystery Blog List as a resource for cozies. There are so many Facebook groups that deal with cozy mysteries, that you could hardly get through them in a morning. I often visit Lisa K's Book Reviews, Cozy Mysteries 24/7, Murder and Mayhem Cozy Mysteries, Joy's Clipboard Reviews, and Save Our Cozies.

One group that gives a great entree to the genre is Craving for Cozies, which has a 2017 challenge of sorts. Individuals post information on books they are reading or have read. You don't need to join the challenge, you can simply peruse the lists of those who have chosen to participate. You indicate the number of cozies you plan to read by 'joining' one of the categories. You could think of the grouping names as a level of addiction to the genre.

I wish I had come across the group earlier, but it's never too late to join. I joined at the 'famished' level. The only drawback to trying to write three books this year is that I read less!! And I do read many other types of books.

If you say you don't have time to read, think audiobooks. Probably half of my reading is done in the car -- I do drive a lot. I buy a few used ones to keep in the trunk (to avoid the agony of being without a book), but I generally get mine from the library. To share the joy, I did a blog post on inexpensive access to audiobooks.