As a child, I remember bringing a book home from the library, finding an apple, and sitting sideways in the living room chair to read. When I could get away with it, I had a couple of potato chips. Or cookie dough. Raw cookie dough was a no-no, so I had to sneak it when my mom left the mixing bowl alone for a minute.

As an adult who writes, I think a lot about food in my own books as well as those I read. Sue Grafton has Kinsey Milhone eat hot hard boiled egg sandwiches with mayo.  I thought it was gross until I made one. Mostly, Kinsey eats fast food and the bread her landlord makes, and she eats regularly.  Janet Evanovich has Stephanie Plum stop often for donuts and chicken, the latter at Cluck in a Bucket. We won't talk about what Lula eats.

Lots of cozy mysteries feature food. There is a group of cozy writers who have a blog about food and mysteries -- www.mysteryloverskitchen.com. This isn't a passing thing, July 2014 is their fifth anniversary. Though my protagonist is a lousy cook, Aunt Madge makes muffins in my Jolie Gentil series.

Meals are not regular components of all fiction. You don't see Jason Bourne remembering to grab a sandwich when he stays a step ahead of assassins. For that matter, he doesn't remember who he is, so why remember to eat? Yes, he eats, but it's hardly on a schedule.  Nor would it make sense if he did.

The ones I don't get are the characters who forget to eat. Who does that? I'm listening to 14 by Peter Clines, which is described as an apocalyptic mystery.  (Who knew?) I get that when there is a lot going on food is not first in one's mind. But at the end of a bad day the lead character, Nate, is climbing into bed and remembers he hasn't eaten since breakfast. And he still goes to bed.  I'd be up all night thinking I'm hungry. On the other hand, when the apocalypse is on the doorstep they do inventory their food.

I am not big on description other than venue and weather, and even then I'm sparse. I've finally added food to a list of things to check as I edit a first draft. I seem to remember breakfast and coffee, not so much lunch. However, readers have said my books make them hungry because Jolie and friends are always eating. They seem to have adopted my snacking habit.

Food is fun, when you have enough of it. Since some people don't, Jolie chairs a food pantry committee at a local church. A book can't lecture readers, they put it down. Jolie and friends stage inane fundraisers. Mostly people don't get murdered at them.

As I work on the eighth book in the series, I'm debating whether to kill someone in a coffee shop. Jolie and friends hang out there a lot, so that probably would not be good for business.  I'll have to noodle it.
*     *     *     *
Check out Elaine's web page or sign up for her newsletter.
Posted by Elaine L. Orr at 8:55 PM No comments:

Linda Rae and the Nellie Chronicles

My cousin Linda Rae started a book about our grandmother, Nellie.  She was always going to find the time to finish it.

You can see she was a happy baby.  She is laughing in almost every photo, a precursor to her later ability to chat up and charm anyone.  If you walked with her through her family's neighborhood in Topeka it was immediately clear she knew everyone who walked by. 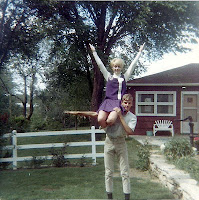 Linda was a cheerleader at Hayden High school and Kansas State.  She used to laugh as she said that her K State cheerleading was the achievement her mom was most proud of.  We acknowledged that it represented a life our mothers, who did most of their growing up during the Depression, could not have dreamed of.  Yes, she earned some of her own spending money and did volunteer work, but she had time to have fun and she had dozens of friends.  Friends she maintained throughout her life.

She was on a teen advisory board at a Topeka department store, something my mother (who sent me to the Wendy Ward School of Charm because I was a cross between a klutz and a tomboy)  noted often. When her family visited mine in  the mid-1960s, I was nervous.  How did an awkward thirteen-year old even stand next to a polished sixteen-year old?  No worries.  Though the many outfits she and her mom had on hangers in the back seat of the car (complete with hats) mystified me, Linda was her same friendly self.  As we walked through my Maryland neighborhood she'd pound on the door of the city bus to wave at the driver, and she was as interested in the White House or the cannons at Gettysburg as my brothers and sister and I.  Or was polite enough to say she was.

Though she had no children, Linda was often with her brother Tom (the orneriest brother on the planet) and his family.   Her two nieces lived near her as adults, so she didn't just "see them," she was involved in their lives.  Okay, maybe she gave Amanda and Melissa too much advice sometimes, but they loved her to pieces, as did her nephew, Tony.

Linda had a busy career as an investment adviser and spent a lot of time visiting Sante Fe to collect Native American pottery, which is displayed throughout her house.  Some of it is on the very knick-knack stand she long ago knocked over in our grandmother's house, breaking everything on it but one item.

The meticulous Linda could also get down and, well, not dirty.  She took many road trips with her mother, Mary Doris, and her husband, Dick.  They included helping build a house (really), visits to pueblos (think more pottery), camping, and taking care of various pets.

We had a memorable trip to Disneyland with her brother and assorted kids, including recording some songs at Universal Studios theme park.  We would likely all pay to have that tape destroyed.

Colon cancer sneaks up on you.  For months Linda thought she had a gall bladder problem and she carried Milk of Magnesia with her.  Her mom, who had Alzheimer's, was dying and Linda traveled between Denver and Lake Havesu City often. I bugged her about it when we were at her mom's funeral.  Yes, she would get it looked at, she had been too busy to have a silly stomach problem checked.  If she had had colonoscopies she would not have had to worry about that seemingly innocuous problem.  When she did get it checked the month after her mom died in 2010, she had stage 4 colon cancer that had metastasized to her liver.  The doctor said she had likely had it for ten years. You can wage a good fight, but you can't beat that kind of cancer.


She did fight.  She had surgeries and chemo, lost forty pounds, and at times spent a lot of hours on the couch with her dog.  Linda was grateful for the care and attention of family and friends. She also kept gardening, read books I (and many others) wrote, spent time with friends, and continued to bug her nieces and brother and his wife as appropriate (or not).  Linda also kept her sense of humor, wondering whether getting a two-year lease on a car her brother insisted she get was perhaps not optimistic.

She worked on the Nellie Chronicles.  And then she lost her battle with the cancer she didn't need to die of.

Life is about a lot more than finishing a book.  You know what your passions are -- family, friends, writing, fitness, your church, traveling, a career.  Get on with them.  Before you know it, time's up. Don't let your life end before it should because you didn't have time for a cancer screening.

Everyone observes what's going on around them. Writers are different. We think we should comment on it. In fiction, we do this through our characters. However, if it appears they are simply spouting opinions about the world around them, those observations go largely unread.

I have a few ideas about the next book in the Jolie Gentil series, and have made notes on several other books. Some of the latter have been rattling in my brain for years.

Anytime I start something new I think, "Really? Why would someone want to read this?" In fact, they don't know if they want to. They need to be convinced. You can draw them in with a book description, but in our world of short attention spans, few people get past two or three chapters unless they are immediately drawn to the characters.

As I write opening paragraphs for several books (my way of starting), I veer off course to read. It's not just a diversion.  It's learning. I owe it to my readers.