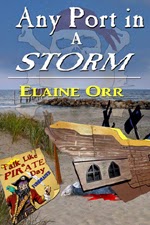 In the Jole Gentil cozy mystery series, most of the books include a fundraiser for the Harvest for All Food Pantry, which Jolie volunteers with. These events are essentially an opportunity for some comedic moments--with a bit of awareness of the needs of hungry people thrown in. Not too much of the latter, since people read fiction for fun.

Any Port in a Storm has Jolie, Scoobie, and friends preparing for a fundraiser based on International Talk Like a Pirate Day, which is September 19th every year.

Say what? Yes, there is such a day, and 2014 marks its eleventh anniversary. Do an online search and you'll see there are events around the U.S. and a few elsewhere.  I stumbled on it a few years ago when I did a search for "silly ideas for a fundraiser."

In Jolie's world, a storm is brewing off the New Jersey coast, a not-uncommon occurrence from late August through October. Finding a body under the pirate ship was not part of the plan. 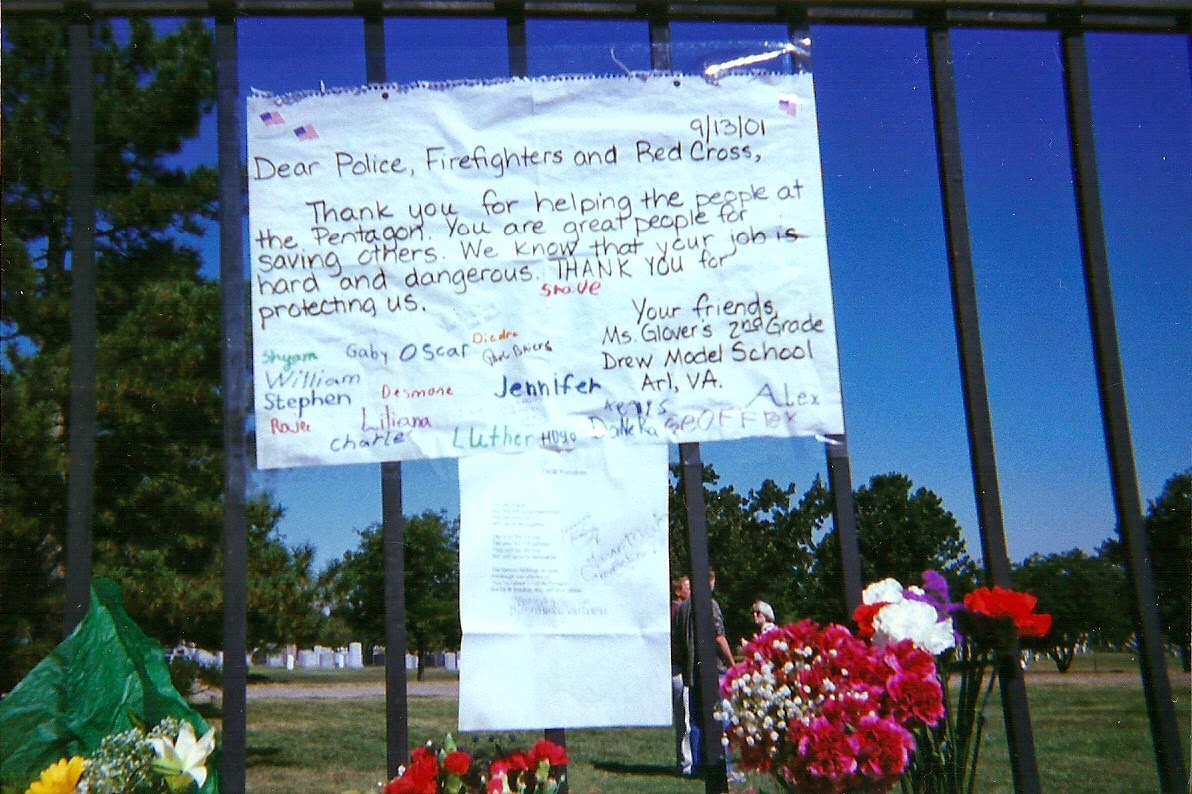 Fifteen years ago, I was working in a cubby-hole office at a DC firm when a colleague came in and said, "Something's happened in New York."

We could look out one window and see smoke from the Pentagon crash site, though that lasted relatively briefly. Since we were about four blocks from the White House, many of us wondered if more planes were coming and whether they would strike near us. That fear was allayed relatively soon, as all flights were required to land at their nearest airport.

Was it safer to stay at work or leave? My sister insisted I not take the Metro, so my choice was made for the time being.  My car was about eight miles away in a suburban Metro parking lot. A car would have been useless for the first couple of hours, as streets visible from our eighth-floor office window were their own parking lots.

About fifteen of us watched the office television. I was the only one who cried as the towers came down. I never understood that.

It was impossible to get on the Internet, so there was no way to view news there and we could not send or receive emails from family. I volunteered to staff the phones so the support staff could leave, but I didn't know how to transfer calls. When a call came in for someone still in the suite, I used the PA to tell them. That was eerie. The grandmother of one staffer kept calling, and I kept repeating that her granddaughter left safely ages ago.

The rumors stick with me. There was a bomb in a car on Capitol Hill and another at the State Department. The latter was 'verified' information. When I looked in the paper the next day, there was a one-sentence reference to the State Department one having been untrue. No others were mentioned specifically. I suppose that was the one most-often stated as true.

The mental picture I retain most vividly is that of Defense Secretary Donald Rumsfeld helping carry wounded at the Pentagon. Perhaps it's because I was close, perhaps because he will (hopefully) be the only Defense Department secretary to have to do that. I see the expression on his face as clearly as if he were standing in front of me.

I did eventually get to my sister's house in Kensington. A colleague who lived a few miles from her took me there. My sister had earlier rushed to her daughter's middle school. It was a short distance from the Navy Medical Center, a tall building amid short ones that she thought could be an easy target for another plane.

My sister drove me to my car, and I went to visit my two brothers and their families that evening. Our third brother was in New Jersey. He was stuck in traffic on a parkway not far from the Twin Towers, and saw the smoke for much of the day.

On September twelfth I went to the scheduled meeting of a Social Equity Panel. We briefly discussed canceling it, but decided it would be letting the terrorists win, somehow.

It was Saturday before I drove to an area near the Pentagon. I took a single carnation and drove along the perimeter at the back of of Arlington National Cemetery. Eventually I reached a patch of lawn where people had left flowers and other items.

The photo is of a sign on the cemetery fence. It reads, "Dear, Police, Firefighters, and the Red Cross. Thank you for helping the people at the Pentagon. You are great people for saving others. We know that your job is hard and dangerous. Thank you for protecting us." The poster is signed by 2nd graders at Drew Model School in Arlington.

With baseball in the air in the U.S., it's time to remember the most unique team  in history -- the Simon Brothers Baseball Team.

When John M. Simon and his wife Minnie (Hagerty) Simon had their first son in 1893, they had no idea that their farm in Olsburg, Kansas would one day host a baseball diamond or that the team that played there would be comprised of their ten sons. Oldest son John A. Simon (born in 1893) had clear memories of his father's dream and how the older boys would work with the younger ones to teach them how to play the game.


In the 1920s, baseball became synonymous with Babe Ruth and towns throughout the country formed teams that played teams from neighboring towns.  Though many took the sport seriously, these were largely groups of amateurs who played on weekends and the games were a town event. Cars were still a luxury for most families, so local teams rarely traveled far.
By the mid-1920s, the Simon Brothers Baseball Team played in several towns in Pottawatomie County in Northeast Kansas. The teams they played would often be from Manhattan or Westmoreland, the county seat. Though the brothers enjoyed playing, it was hard work.  The older ones farmed or had other jobs, and practice was in the evenings with most games on Sundays.

In the late 1920s, the family team was "discovered" by Kansas Senator Arthur Capper, who was well known as the founder of Capper's Weekly, a popular weekly tabloid that published from 1913-86.  He bought the brothers their first set of professional uniforms and paved the way for the team to play an exhibition game at the 1930 World's Fair in New York. Twenty years later John (Jack) Simon was still describing the awe the brothers felt after traveling from the Kansas prairie to the big city.


While some brothers left the state for military service, they generally stayed in Kansas.  Only Floyd died outside the state, in California.  John (Jack) and Jake were barbers. Floyd and Glenn farmed in Pottawatomie County in 1930.  Ed was living on the family's farm when he became the last surviving brother, in 1993.  He lived to be 97.
Oldest brother Jack Simon married Rosa McBride of Seneca and Topeka, Kansas. They lived in Topeka, where she had her beauty salon and he worked as a barber. Jack had prize hunting dogs. They were a handsome couple.
*       *       *
Article by Elaine L. Orr.  Rosa McBride was first cousin to my mother, H. Rita Rooney. Their moms were, respectively, Annie and Nellie Teehan of Lillis, Kansas. Rosa's husband, Jack Simon, died when I was three, but the stories about him did not. A version of this article (for which I maintained ownership) was on Yahoo Voices for a time.
*     *     *     *     *     *
Check out Elaine's web page or sign up for her newsletter