I walked into the Chatham Public Library a few days ago and was thrilled to see not only a display of the Harry Potter books, CDs, and movies, but also a terrific set of banners about the books. It was part of the library's many programs to encourage children to

read. School had just let out for the summer, so there were kids everywhere.

Seeing the continuing enthusiasm reminded me of how much I learned from reading J.K. Rowling's masterpieces. Probably the best insight was seeing how she planted characters and pieces of information in early books and groomed them to be important in future books. I can't say succeeding, because that implies the next one.

In book one (Sorcerer's Stone), Hagrid delivered newly orphaned Harry to Dumbledore by riding a motorbike he got from young Sirius Black. Sirius is not mentioned again until book three (Prisoner of Azkaban), and he then becomes one of the series' most important (adult) characters. And that motorbike? It helped save Harry's life in book seven (Deathly Hallows).

As Harry, Ron, and Hermione aged, so did the intricacy of the books' plots, vocabulary, and depth of evil. There was the predominant battle of good and evil -- Harry versus Lord Voldemort. I found the most malevolent character to be fifth-year Dark Arts teacher Delores Umbridge. Petite, kitten-loving Delores was sadism personified, disguised in a bow and cardigan. A reminder that evil takes many forms. 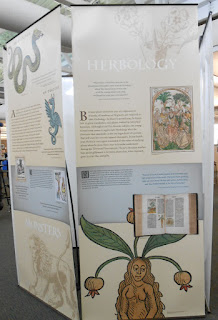 And there are the names of people and places. Mort means death in French, perfect for Voldemort. When Umbridge wanted a group of students to oversee others, with ill intent in mind, what better term than the Inquisitorial Squad? And where was Dubledore's nemesis imprisoned? Nuremgard. There are fun names, too. Ron's brother marries  Fleur Delacour, Flower of the Heart. And some names just make you laugh -- Dedalus Diggle, Filius Flitwick.

A recent article said that Rowling later wished she had paired Hermione with Harry, rather than with Ron. There was such wonderful teenage angst (and typical hormones) as the Ron and Hermione relationship grew. Harry and Hermione were both so focused -- Harry on saving the magical world and Hermione on her studies. They would have made (to me) a boring pair. I'm glad Rowling wrote as she did.

I read each book twice, and listened to them as I regularly drove the thousand miles from Iowa to Maryland. If I can't fall asleep, I pop in a CD. Each exposure is like taking a writing class. An enjoyable class, one that reminds a writer that masters still live.
*     *     *     *

Check out Elaine's web page or sign up for her newsletter
Posted by Elaine L. Orr at 10:48 PM No comments: