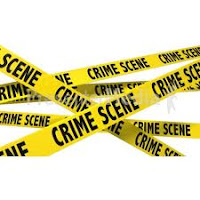 I was considering the title for a new project and my mind wandered a bit.  It's an occupational hazard. Think of all the fictional crime shows that begin with the letter C.
Makes you wish you had a psychology degree.  It also means I'll shy away from the word 'crime' in a title. If you know more C shows, feel free to add to the list.

That About Covers It

Every article or book on marketing your work says some of the same few things, starting with write something worth reading and followed by use a really good cover designer.  For some I've done the cover myself.  On one you can't tell but others you can.  So, after I'd sold a couple thousand books I began working with a wonderful cover designer named Patty G. Henderson, who does covers for a number of indie writers.

Sales immediately rose when she redid the cover of Appraisal for Murder, and I truly believe it is her cover that draws people to Any Port in a Storm, which is now the biggest seller of the Jolie Gentil series.

Now that the four books have been on sale for awhile I find that the second book (Rekindling Motives, which I loved writing) generally sells five to ten percent fewer copies and has the fewest reviews.  Why?  Look at these four covers.

What's the difference?  Drumroll...dark colors for Rekindling Motives.  The designer (Miss Mae -- also really good to work with) developed a cover along the lines we discussed.  What this reinforces is that the best way to let cozy mystery readers know that a books is not a police procedural or something dark is to have cheerful-looking covers. If the readers wanted gore they'd go watch a CSI episode with bugs.

This is not rocket science, but it was instructive for me. So, as I work on Trouble on the Doorstep, I'm thinking yellows and blues are good.  And they'll be needed to convey a light tone, as the books opens with a short scene during Hurricane Sandy. It is the Jersey shore, after all.  And the resilient spirit of those in the New Jersey beach towns is reflected in the book, which will be out in early 2013.
*     *     *     *     *     *
Check out Elaine's web page or sign up for her newsletter