First person comes more naturally to me, and I like the idea that readers only know what the sleuth knows. There are challenges, mostly the flip side of what I like -- I can't reveal anything to readers unless the sleuth discovers it directly or indirectly.

There's no getting around that first-person cozy mystery amateur detectives (at least in series) can come off as nosy. Generally, the first book in a series throws the crime solver into the mix because something happens to her (or him). In some series she discovers a body and is blamed for the murder. Other times it's someone close to the sleuth and she doesn't want to see them convicted of a crime she is certain they didn't commit.

After the first book, the protagonist needs reasons to get involved in (usually) murders that may not directly pertain to her. I like to pepper the two first-person series with townspeople who can come to the forefront in future novels. Jolie knows them, so at some level she cares what happens to them -- or to the person who is accused of the crime. I also have her as a real estate appraiser, which puts her into contact with lots of people and businesses.

In first-person mysteries, the crime solver does a lot of internal musing. They can in third-person books, too, but since information can be revealed in more ways, the sleuth's thought process doesn't have to be as detailed.

I don't use a narrator in the two third-person series, so there is no lecturer to describe the scenery, history, or what characters wear as they enter a scene. I may have the sleuth spend time observing a setting, but even in third person, if a room is to be described there has to be a reason beyond the character walking into it.

What I like best about third-person books is that there can be multiple points of view. In the Family History Mysteries, I used Digger's POV only in the first book, and expanded to add Marty's (a reporter friend) in books three and four.

There's also the most popular character -- Digger's Uncle Benjamin, a companionable (if sometimes annoying) ghost. He a good example of a device that can become part of the drama. There's no way Digger can know all local history, or who did what to whom over the last seven or eight decades. (She's in her late twenties.) Uncle Benjamin can provide background and point her in varied directions.

Some of my earliest writing (which will never see the light of day) had multiple points of view, sometimes in the same chapter. I didn't switch heads within a scene -- or I don't recall doing that. It's painful to reread the stuff. Over time, I learned that I used several points of view because it was easier for me than to figure out how to discover information when only one or two people did the thinking.

Note I said for me. Lots of books have multiple POVs. I'm not about to say five or ten is too many if it suits an author's purpose.

Every time I read, I learn what an author does well. Occasionally I spot something that seems awkward, but that can be interesting, too. Bottom line, point of view decisions are complex ones. I enjoy the challenges.

Remember When People Thought 50 Was Old?

My friends and siblings and I have discussed that we feel (and sometimes look) younger than our parents did at similar ages. Some of it's the increased emphasis on diet and exercise; add to that modern medicine and we can age more gracefully.

If you're close to my age (which is 71), then your parents may have lived through the Great Depression and sorrows of World War II. Communal stress ages everyone.

We also define 'retirement' differently. Travel, new hobbies, maybe even a second (or third) career. When I swim at the Y, there are hordes of 'older' people exercising. At least a dozen white-headed people walking through my neighborhood daily -- usually more. If you're over a certain age, do you remember your parents exercising?

And that, like most things, brings me to writing. There are plenty of young writers. However, there are also lots of people who write books after retiring.  As someone who produced a lot of stories on a typewriter, I firmly believe that the ease of production is at least partially responsible for the swelling ranks of published authors.

I started writing seriously in the mid-1980s -- first with plays and screenplays, later novels. I had a really busy first career and knew I'd have to stick with that for a good while. Sometimes when I was taking courses in fiction writing or working late to write a few more pages, I'd think of other things I could be doing. Like sleeping.

Other times, I'd be in an art museum and think of all the great talents in the world and wonder why I thought I could ever sell what I wrote. I don't know why art museums conjured that feeling more than libraries or bookstores.

The other side of that view was hockey player Wayne Gretsky's quote, which I placed near my home computer: "You miss 100 percent of the shots you never take."

I'm still aiming the puck toward the net.

My Family's History Contributes to Mysteries

Each summer for twenty-seven years, I've headed to Southwest Missouri for the reunion of Orr and related families. I should say twenty-five years, because we did 2020 and 2021 on Zoom. Still fun and lots of shared stories.

The reunion began in 1937, which marked the 100th year that the first Orr family (that of my GGG Grandparents William Orr and Jennie Adams) came to Lawrence County, Missouri. They were joined by other relatives beginning in the 1860s, and there were eventually Orr, Knox, and Campbell families, as well as Shirley families in the east and the James Orr family in Indiana. And then they spread to 49 of the 50 states. Vermont must have been too cold. 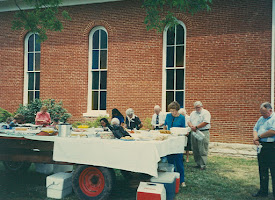 For the first seventy-plus years, massive amounts of food were piled onto wagon serving tables and the signature lemonade came from hand-squeezed lemons.

Some lemons still get the benefit of upper body strength, while others provide their juice through an electric squeezer. The same bucket is employed today as in 1937, though supervision in 2022 passed from Bobby and Margaret Samuels to a community effort.

More fun than squeezing lemons indoors was Bobby and Margaret's lemonade making on the back of his pick-up truck. He had help from every child who attended. 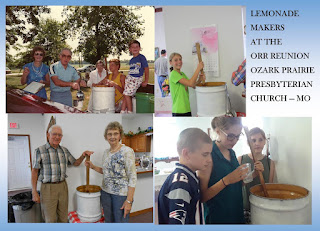 Those of us who have become used to cool indoor homes rejoiced when the Ozark Prairie Presbyterian Church (founded by Orrs among others in 1854) added an air-conditioned community room.

The food is just as good, but attendees don't wilt in the prairie heat. We're smaller than the initial years, when more than 100 people came from many parts of the U.S. This year we had only several midwestern states, but I expect that as COVID continues to wane the numbers and home states will rise again. 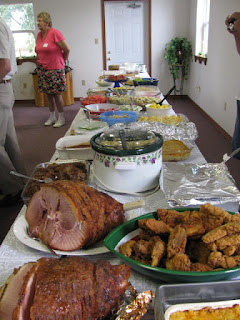 While this annual reunion may not seem to have a lot to do with writing fiction, the stories and time spent with relatives have a lot to do with my Family History Mystery Series. Not that I use direct experiences in the books. I wouldn't be able to return.
What I've learned is that large families and those they marry into have hundreds of tales. For example, when crops failed due to drought in Kansas, one gutsy widow brought a wagon to Mount Vernon and relatives filled it with corn. During the Civil War, large families in border states had sympathizers on both sides.
Because I post family trees on Ancestry.com, I had a call from an adoptee who learned a recently deceased man was her birth father and wanted a photo. (I obliged.) Another caller thought he looked exactly like a member of our clan and wanted contact information for potential half-siblings. (I didn't oblige, but they later figured it out on their own.)
Do either of these scenarios sound like fodder for a book? Maybe. More to the point, I've learned that there is no such thing as an unrealistic plot line when it comes to writing mysteries about extended families. If you can imagine it, it can happen -- and probably has.
My Family History Mysteries take place in Western Maryland, about 100 miles from where I grew up. But the trouble the characters get into could happen anywhere, in any family. Trust me, I've heard it all.
*     *     *     *     *