Authors constantly look for ways to improve their writing. Even the best plot and characters who grab readers may not be perfect. Or they may be, but the author hasn't let them show it. 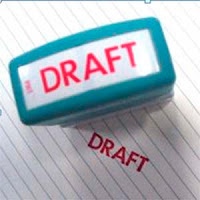 With much hard work and a little luck, we writers figure out how to apply fixes as we work or while in revision mode. Some of the 'quick fix' things I've learned to do through the years are:
As a largely self-published author I can change a book -- probably some kind of heresy. I did go back to some of the early books in the Jolie Gentil series and changed a lot of the "she said" types of phrases.

I usually had action in a segment -- "...she said, patting the dog's head." I moved a number of the phrases to precede the dialogue. "Jolie patted the dog's head" (as a complete sentence) would be first, then her dialogue. It's clear Jolie is talking and also gets rid of a gerund -- I find ing words almost as annoying as misused adverbs.

The reader has a cleaner read.

For a very early book, I did change some substance. In 2006, Author House (a firm for self-published books, long before Amazon's KDP) issued Searching for Secrets. It was a short mystery that put almost as much emphasis on a potential romance between the two main characters, a teacher and police officer in Iowa City.

After a lot of thought, I revised the book. The romantic elements of the older version seemed forced and took away from the plot. I liked the story, so I reworked parts of the book. Searching for Secrets is probably 90 percent the same, but with less focus on the characters' thoughts about one another. It flows better and emphasis is on what the characters do rather than think.

Some will call this sacrilege. I am much happier with the new version. A friend's note confirmed that the revision was a good decision.  He had just finished reading Appraisal for Murder and said, "It is a good read; much better than your first effort Searching for Secrets." Only a good friend will tell you something like that.

I believe the writer has a responsibility to keep working until a book is as close to perfect as it can be. We aren't just asking for a buyer's money, we're asking for a reader's time.

However, as a part-time writer with a very busy day job in the early 2000s, I didn't work with a critique group. I hadn't read a lot of books on writing or taken as many courses that focused on mysteries. But I had probably read twenty or more and attended a lot of writing workshops, which only serves to stress how much we can learn by doing more to improve.

An effective review technique I now use is to send a draft book to my Kindle. Seeing it as a reader does points out typos. It also emphasizes the pace of the book. Where does it lag? (It isn't always the middle.) I don't send it to Kindle until my Decatur critique group has reviewed it, but I read it on Kindle prior to sending it to beta readers.

Don't know how? Every Kindle has its own email. After signing in, check in the "Manage Contents and Devices" link at the bottom of your Amazon page. Look at your individual devices and you'll see the email. Send the book as a "doc" not a "mobi" file. Look for it in the documents part of the Kindle, not as a regular Kindle book.

Are my books perfect now? No, but the reviews are consistently good. More important, I continually work hard to improve.
*     *     *     *
Check out Elaine's web page or sign up for her newsletter.
Posted by Elaine L. Orr at 6:22 PM No comments:

What's a stand-alone mystery? One that is not part of a regular series. We all know P.D. James' Adam Dagliesh books, but she also wrote Children of Men, one of my favorites. If you are looking for some, Goodreads has a good list of stand-alone mysteries.

I write the Jolie Gentil and River's Edge traditional (cozy) mystery series, and love the characters and settings -- small towns on the Jersey shore and along the Des Moines River in Iowa.

This spring I finished the second River's Edge book and decided to try something different. I like humor in mysteries, though not if they have a lot of sitcom-style dialogue. Even zany characters need to be enough like real people for me to buy into a story.

I didn't initially have a specific idea or setting, but then it occurred to me -- why not set a book in Illinois? I moved to the state in 2014 and have been exploring towns in the south-central part of the state. And I do like small-town settings.

Once I'm thinking about something, ideas start to percolate. In this case, that's a great term, because Tip a Hat to Murder (out later in 2016) is set in a diner. A diner with a lot going on besides cooking hamburgers and hotcakes. Images of a cigar-shaped silver building, booths, and tiled floors began to dance through my brain.

Ideas about who would hang out there and what would lead to a murder in a diner took form. Sometimes I scare myself.

Now what? I have developed the characters in the two series so much that the their actions are almost second nature to me. We've been writing companions for years.

I decided to let the characters evolve. It turns out that's shorthand for "not sure who they are beyond their role in the book," which slows down writing. For example, the local police chief is pretty smart. Why is she in this small town? Oh, the author should know that reason. Simply the fact that the sleuth is in law enforcement rather than an amateur is also a switch for me. How much "police stuff" should be in the book to make it realistic?

The book was a slog-along affair until I grappled with these questions and figured out a few other things. Does Chief Elizabeth have friends? What other kinds of business owners are in that town, and how can they contribute to (or impede) solving the murder?

Now my mind is churning with future possibilities for these characters. So far, no plans for a new series. In fact, Tip a Hat to Murder has probably slowed down Jolie Gentil and crew in Ocean Alley, New Jersey. Time to get back to them.
*    *    *   *
Surprise! Tip a Hat to Murder became the first book in the Logland Mystery Series.
Check out Elaine's web page or sign up for her newsletter.