Over the Hump with River's Edge Three

The ebook of Demise of a Devious Suspect, third in the River's Edge series, has been joined by its paperback. When the paperback appears, I feel as if the book is real. Silly, I know -- especially since more readers buy the ebook. Still, there is nothing like the feel of a hard copy. 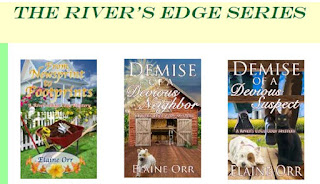 Protagonist Melanie has secured full access to her family's farm, so she and Mr. Tibbs have a comfortable place to live and a porch from which to view the cornfields. A place to invite friends to share a beer.

She's so at ease that she invites the handsome Syl and her buddy Stooper to be her guests at the Farm Bureau potluck supper. And then she finds a body in a coat closet at the dinner.  The body of the grain elevator owner with whom her late father had a strained relationship.

The discovery is upsetting, but she's not a suspect. However, she begins to wonder if the dead man should be a suspect in her parents' deaths. They were killed in a car accident on icy roads. But now it seems someone may have forced their car into a semi.

Nothing is ever simple.

Demise of a Devious Suspect lets readers know the characters and the town better, and introduces Cat, who inserts himself into Melanie's life. To the distress of Mr. Tibbs. Pets in my mysteries do not have human characteristics, but they are smart.

As a writer, I feel a series hits its stride with the third book. Perhaps it's because I'm fully comfortable with the characters. Comfortable enough to give them more ways to pry into the puzzle.

You can find Demise of a Devious Suspect at all sites --

The so-called red herring in a mystery is a false path the sleuth follows. As s/he starts down a trail it seems to be one  that will help solve the crime. It eventually becomes apparent that a suspect or lead is not what the crime-solver hoped it would be.

From the detective, PI, or amateur sleuth's perspective, following a false clue is largely a waste of time. It could mean a person who provided the lead is not to be trusted, and that's good to know -- but the red herring still takes time to address. It diverts the PI from the best path.

From the reader's vantage point, the red herring can be a good thing. The book won't end soon. Many times I've wished a good novel were longer.

So what do I mean about staying true to red herrings? They must appear to be logical clues, not simply time wasters or a chance for the sleuth to look brilliant. The reader doesn't want to read fluff or feel the wrong path could have been easily avoided.

Some of the best false directions are from the classic mystery writers -- Agatha Christie, Dashiell Hammet (especially The Maltese Falcon), Rex Stout's Nero Wolfe novels and of course Raymond Chandler's Sam Spade (especially The Deep Sleep). The pace of these older novels is slower than what readers seem to expect in more current books, but don't let that turn you off. Follow the detective's mental trail and you'll learn a lot about good writing.

Though not mysteries in the classic sense, J.K. Rowling's Harry Potter books have a plethora of twists and diversions. Some are natural, because Harry and friends are kids -- they make the occasional false assumption (based on past experiences with other characters). I think the path to Professor Snape's role in the stories is strewn with some of the best red herrings in literature. And when they are revealed, they make sense and pull together several story lines.

People occasionally tell me they especially like the false clues in a couple of my books. What they can't tell (thankfully) is that I decided that the murderer would be someone different than my original intention. The ultimate bad guy made sense, but so did the one I originally planned. Don't tell anyone.