“Remember: Plot is no more than footprints left in the snow after your characters have run by on their way to incredible destinations.”
—Ray Bradbury

I love it when a fresh idea wanders into my brain. Sometimes I'll write ten pages to give a spark to the concept. I have a drawer full of these first chapters.

A story only goes beyond the ten pages if a character threatens to strangle me if I don't bring them to life. I generally don't do complicated character back stories, but I do make notes so that their personality is clear. Then the character grows with the story.

I learn more from mistakes than successes, and I recently made a big one.

I had this great idea for a motive for murder. Say you worked in an eatery (elegant restaurant or greasy spoon) and you made a lot of money through tips. Then say the owner decides patrons would really like it if they paid just a little more for a meal but no longer had to leave tips.

What?! You'd make the same as the slacker who takes a bathroom break every time a family with three small children walks in the door. 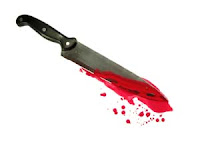 That restaurant owner needs to stay away from sharp objects -- or at least not let the food servers near the steak knives.

The idea morphed into Tip a Hat to Murder, and I quickly wrote one of the best first chapters I've come up with. In my humble opinion. And then the story sloooowed down.

For quite a while this made sense -- I had a deadline for another book, so that came first. Then that book was finished. Then I needed some surgery -- that takes time, plus I swear anesthesia addles brains for weeks.

And the story still progressed slowly. Finally it hit me. The idea was good. The characters never took form except for their duties in the story.

I wanted them to do certain things, but had no idea what element of their psyche would make them want to do these things. Or maybe make them not want to.

I didn't have to go back to the proverbial square one, but I spent a couple of weeks pondering each character's life and motives. A number of aspects of the plot changed -- even the murderer! (The first one simply wasn't angry enough.)

The lesson is one I thought I had learned long ago. There is no good story unless there are well formed characters.

As I finished the first draft, I was ready to be done. Other stories are percolating. However, the characters have taken hold and I hate to leave them.

In fact, I meant this to be a stand-along mystery and am considering making it the first of a new series. Since I don't think I can balance three series, that likely won't happen. At least not now. No matter what, the characters in Tip a Hat to Murder are in my brain to stay. They should have been there from day one.