I spend a lot of time naming characters -- but perhaps not quite enough. I was recently writing a scene in a new book (Demise of a Devious Suspect), and had four characters meeting in a diner. One was the protagonist, Melanie. The others were Sandi, Syl, and Stooper. And the food server was Shirley.

Gee, four people whose names begin with S. It's not a crime, but it's not helpful for readers. In my (weak) defense, I named them at separate points in the series, and this is the first time they've all been in one room. But how did I not see this?

Though I'm not sure another writer should take advice from an author who puts four S named characters in one scene, here are some things I consider in naming characters.
There are no hard and fast rules in creating character names. Do avoid using the same first letter for four people who will sit at a table together.
*     *     *     *
Check out Elaine's web page, sign up for her classes, or receive her newsletter.
Posted by Elaine L. Orr at 11:22 PM 3 comments:

Getting Comments from Family and Friends

Close friends or family are not only aware of an author's work, they may be their biggest cheerleaders. Some of them may have adjusted their schedules to help a writer find time to work. 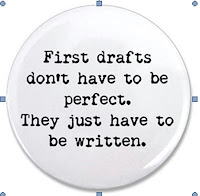 Often authors turn to friends and family as first reviewers of a draft. However, they may be so impressed that we finished a book they are not sufficiently critical, in the literary sense.

It is natural that those close to you are among the first to read your work, perhaps even chapter by chapter. A spouse or best friend may have the interest or talent to comment on character or plot development.

More likely, friends and family will provide general reactions. My sister's reviews always lead to at least one forehead slap, with me asking, "How did I not see that?"

Once you have comments from family and friends, you—and only you—decide which to incorporate or which to disregard. You may have a friend who thinks because they took the time to read your project that you should take their advice. Not so, though it's important to thank everyone who offered feedback.

After you make revisions based on the friendly fire, approach someone with expertise. Perhaps a librarian, English teacher, or local journalist will be willing to read a draft. This is a major request, so you need to be professional in how you approach them, and you need to make it easy for them to decline.

What?! I’m serious. I don’t believe in guilting people into something. Let them know they are seeing a second or third draft. This could encourage them to read your work.

DON’T LET ANYONE BURST YOUR BUBBLE

We wouldn’t start a book or blog post if we didn’t think we had something worth saying. No matter how modest we are, we like that first draft or we wouldn’t be passing it around for comments.

Even so, our work can always be improved. An author is too close to a project to see its flaws – perhaps even to spot inconsistencies or inaccuracies.

That’s why we ask for input.

Stay confident in your work. When it comes to comments, take what you like and leave the rest.

PTSD: A Family Affair in Falling Into Place

Some books rattle around in your head for years. The idea for Falling Into Place grabbed me more than a decade ago, and I wrote perhaps 10,000 words. It is the story of Everett, a father of four who prefers his gardens to a lot of people contact. In the 1970s, he's a stay-at-home dad before it was a choice.

And he has a secret.

Since readers see the world from Everett's point of view, they know he used to be an electrician, but can no longer work because of the 'qualms.' His wife, Sue Ellen teaches, and has been pretty good at not showing resentment. His four children don't understand his passive interactions with the world.

Readers have the vantage point of the 21st century. Everett's memories of airplanes and poppies in North Africa during World War II and ensuing anxiety seem to be PTSD -- a term not used to describe World War II veterans who had difficulty coping with the world.

I remember my father using the phrase shell shock to describe someone, I don't remember who. Such topics were not discussed. Nor are they in Everett's home.

Falling Into Place opens as Everett's world turns upside down. His wife's cancer battle doesn't look winnable, and his four twenty-something children aren't sure he'll be okay on his own in their town of Burlington, Iowa.

As an author who usually writes light mysteries, I found Everett to be his own mystery. I made the puzzle, so I had to figure it out.

Through the years, pieces of his life -- present and past -- came into focus. So did his wife, children, and a precocious granddaughter. But how to reveal his secret? If I had tried to force the discovery, something less than perfect would have emerged. Not to say the book is perfect now, but as his past surfaces, the influence of his World War II experiences becomes clearer. To him and his family.

The past and its impact can't be erased. But awareness can lead to understanding. I describe the story as one told with humor and grace. To me, that's Everett's world -- when he lets people in. I think you'll find him worth getting to know in Falling Into Place.
*     *     *     * Check out Elaine's web page, sign up for her classes, or receive her newsletter.
Posted by Elaine L. Orr at 4:03 PM No comments: