Why "Going Wide" Can Work for Authors

Prolific authors -- whether they work with a publisher or self-publish -- sell many books through Amazon. I find it humbling (and fun) to sell books in so many countries.

As a largely self-published author, I've weighed the benefits of publishing solely through the KDP Select program, which provides incentives for selling only on Amazon's platforms.

Through KDP Select, authors can provide books free for a few days per quarter and be paid when readers essentially 'rent' (and read) books through a subscription program called Kindle Unlimited. The theory is that exposure to an author's work will lead readers to buy additional books.

I ultimately decided to leave box sets of one series on KDP Select plus a few family history books. Others I sell on all sites, which is termed "going wide."

I now make as much money selling on other sites as on Amazon -- more some months. It took a lot of experimentation to get the scales to tip to the wide side, so to speak.

Sell Through a Distributor or With Each Retailer

Initially, I placed books with Amazon (which produces mobi files), then separately to Barnes and Noble. I added Kobo and loaded each ebook three times. I couldn't easily sell to Apple, because they required books to be published using their software. I was not going to spend time learning more software to get books to readers when other options were available.

That led me to Smashwords, to which I load books once and they send them to a number of retailers beyond Amazon, using largely the epub format. They charge what I consider a small fee for the service. With practice, it's become an easy process.

I've left a number of books as direct sales on Barnes and Noble and Kobo, but generally publish all new books via Smashwords as well as Amazon. I have a soft spot for BN, so occasionally publish directly with them, but it's more work. I also publish all my paperbacks through them (in addition to Amazon). I think there's some selling synergy by doing both versions, but can't prove it.

The sites have varied requirements, so there is extra time in formatting books for Amazon and Smashwords. Marketing has multiple targets. Tweets become more time-consuming because they must be constructed for all websites -- and sometimes the sites' international links as well.

You buy more ISBNs, add more components to an author website, and maintain an author profile in many places. I have to be careful to do this work in "chunks" or it would detract a lot from writing.

The additional time could be considered a big con, but it can add to a lot more readers -- and money.

I don't write for fun -- okay, I do, but it isn't what I publish. If I'm going to polish and publish a book, I want to make money. Going wide lets me make more, and that's the big pro.

How Did Going Wide Translate to More Readers?

In theory, more places to sell should mean more books sold, but it did not happen quickly for me. At first, a new book would sell a bunch of copies and then sales would taper off again.

Many of my family members are iphone users, so they read my books on ipads or their phones. I didn't sell many books on Apple, and it ticked me off.

My Jolie Gentil series has eleven books, and after considerable thought, I created distinct box sets for BN, Apple, and Kobo (via Smashwords). That increased sales some, but not much.

I work too hard to like giving away a lot of books, but decided to make the first box set of the Jolie series free. The plan was to do so for a few weeks.

You may have heard that luck is opportunity meeting preparation. I had some good dumb luck. I was working on two books and forgot to reinstate the price for the free box set for several months. Didn't even notice it until I saw a slight uptick in sales of the next two box sets.

And then sales of the succeeding box sets took off and readers began to notice my other books. I honestly don't think the experiment would have been successful if I had reinstated the price on that first box set after only a few weeks.

The pie chart shows how the last month of sales has been split among the key markets. In March, Apple led sales. I'm happy to have the top site move between BN and Apple, and wish I could do more with Kobo and Overdrive (library ebook sales).

Now, if you're a USA Today bestselling author, these numbers may not look all that good to you. I like them, and they continue to grow.

While readers can buy directly from Smashwords, most go through the better-known retail sites. Smashwords lets author run sales on books via a discount program that runs for a specified periods of time. They promote the sales and the reduced prices appear on all the sites to which an author distributes books. 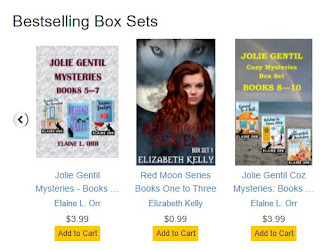 I rotate books through the sales, and usually offer one book free. The pie chart shows a decrease (over the last 30 days) in Smashwords sales because I sold more books during a recent sale, which is now over.

The Smashwords sales have introduced readers to books in all my series and stand-alone fiction. Slowly those sales have grown, especially since I made the first books in the River's Edge and Logland series 99 cents all the time.

The site also lets readers know which books sell best -- two of my Jolie box sets are now near the top of best-selling box sets. (Not the first set, because it's free.)

You can't do box set covers in 3-D format, which makes the set
look like books on a shelf, as you can on Amazon. I think that's a more professional look, but you won't hear me complaining.

I want to reach readers everywhere, but I also want to take full advantage of every marketing opportunity possible. To me, the biggest advantage of Amazon's KDP Select  program is the income earned when people borrow the books through Kindle Unlimited. Having some books in that program is an important way for new readers to find my books.

If I were publishing my first book, I'd definitely put it on all sites. I'd probably try for a publisher first, too, but I'm used to self-publishing and enjoy the flexibility (for now).

If a new author wants to experiment, s/he could publish a book via KDP Select and then go wide after three months (the KDP Select commitment). I can't think of a single reason to publish on all sites and then take books off a platform to be exclusive elsewhere.

The methods I've tried the last year work as well as they do because I've written a lot of books, so readers can go from one to another. That takes time. In the meantime, you want to reach readers everywhere you can.