I'm not sure why this eclectic annual event tickles my fancy. Perhaps because it's just so....odd.

If you are a fan of Talk Like a Pirate Day, make sure to greet your friends appropriately. Shiver me timbers, look who's here. Ahoy, maties.

I grew fond of the September 19th holiday when searching for an event to use as a fictional fundraiser for the food pantry in the Jolie Gentil mystery series. Any Port in a Storm developed around the theme, and it may have been the most fun book to write.

Scoobie was able to find humor in all aspects of the day. Here is one of his pirate limericks.

A pirate charms, that's not new.

Me ladies he said, what to do?

Said the wench this is fun

But from spouse I must run

Or t'will be no chance for a screw. 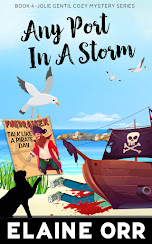 Part of the planning for the event entailed coming up with a list of things people would pay 25 cents to do. (It's a fundraiser, remember?) The list was single-spaced, and included items sure to offend any group.
All this and a murder, too. The book is on all sites, and is included in a Kindle Unlimited box set that's free until September 20th. Enjoy!