The Craziest Thing I've Ever Done (in terms of books)

What happens on Halloween? Kids dress like action heroes and adults act like kids. It's also the day that I issued two new books, Least Trodden Ground and Aunt Madge and the Civil Election.

Who would be crazy enough to do that? Looking in the mirror, I recognize the face.

Least Trodden Ground has been in the works for months and had the benefit of my Decatur area critique group. (Thanks Angela, Dave, and Sue.) The book combines my love of family history with a mystery set in the Western Maryland mountains -- my home state.

Aunt Madge and the Civil Election is a story I promised when I wrote Underground in Ocean Alley. In that book in the Jolie Gentil series, Jolie tries to solve a murder while Aunt Madge runs her campaign. She dove into the race in her mid-eighties to promote sensible growth rather than see a big development change the character of the town. Election results are unknown at the end of Underground in Ocean Alley. 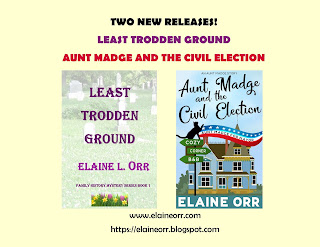 I knew Aunt Madge's camapaign would be fun to write about, but I needed to "hang the idea" on more than people running around putting up yard signs. And then the U.S. 2020 election came around, and I was tired of listenening to people argue. (Yes, I voted. Of course.)

Why not give Aunt Madge a worthy opponent, but have both candidates commit to a civil election? And throw in some humor. Why not indeed?

To write in a parallel timeline to the prior book, I muted the mystery (didn't want to give it away to people who wanted to read Underground) and wrote Aunt Madge and the Civil Election from her point of view rather than Jolie's.

It's a challenge to write a scene from a different POV -- to write a 17,000 word story that parallels a prior book. Of course there are many dozens of scenes in  this "long short story" that are not in the other book. But concurrent action can't contradict what happened previously. Whew! I made some small adjustments.

I was determined to publish Aunt Madge and the Civil Election before the actual U.S. election, so there were several 2 AM evenings followed by a 7 AM morning. And no input from my critique group! They make everything better.

So, today I have two new publications. Least Trodden Ground is available everywhere and the paperback can soon be ordered at Barnes and Noble. (It's on Amazon now.) Aunt Madge and her campaign are available at most online retailers and will be in paperback in a few days.

To add some extra fun, if you comment on this blog post you'll be in the running to win one of two copies of each book. Our black cat Stella will chooses the winners. They will be announced November 6th.

Now, calm yourself by reading (any) good book!