Writers and Their Cats

Our current cats, Stella and Phoebe, are  rarely far from us. They especially like hanging with me, but I think that's largely because I stay quiet a lot -- in the chair in front of my desk, or a recliner fitted with a lap desk.

Mostly I'm ok with their presence, at least until they sit in the laser printer's exit tray or under my feet. Lately that's where Phoebe sleeps. It makes no sense. She could be on a towel on the sofa or by the window. But she rolls herself into such a tight knot you can barely distinguish between her head and tail. 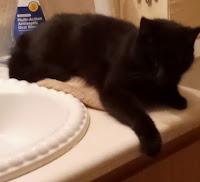 Having a cat at your feet (especially when she has snuck into that position) can be frustrating. (So can working with the newest version of Blogger, which won't let me wrap text around a photo.)

Now check out Stella. She likes to be higher. I walked into the bathroom a few days ago and found her on a towel by the sink. I had just left the room and she appeared to be waiting for my return.

I think the closeness reflects their uncertainty about why the humans are home so much during the pandemic. Normally they rule the roost for many hours each day while I'm writing at the library and my husband is at work. He is back at work, but I'm still working at home.

I'm also struggling to write, so they may believe they are comforting me rather than trying to send me to the hospital.

After weeks of writing less than a page a day, I began working on a new online class and revising an extensive book of family history. I had to make myself do something productive. It feels very self-centered when there are so many people in dire circumstances.

Serious point here. If writers (or anyone) find themselves unable to do routine things, recognize why that's so. It may not be possible to change the circumstances, but perhaps you can do something to distract yourself. If nothing else, many authors are giving away copies of  their books. If you want a couple of mine, send a note and I'll send you a Smashwords coupon.

We are all in  this together.

Email ThisBlogThis!Share to TwitterShare to FacebookShare to Pinterest
Labels: cats and the pandemic, cats and writers, sleeping cats