Thoughts on Working with a Critique Group

I've benefited greatly from working with other authors through critique groups -- especially the Illinois group I now trade work with. If you don't have access to a group, it's worth thinking about creating one. One with other serious writers.

I suggest starting with one inviolable principle. When discussing someone’s chapter or poem, talk only about the writing, not things that come to mind because you read a piece. 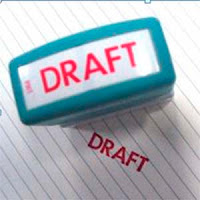 My twelfth grade English teacher (Ms. Virginia Baker) expressed this perfectly. She was having the class discuss some piece of literature (Kafka’s Metamorphosis, I think), and wanted us to talk only about the story. She said, “I don’t want to hear any I-had-an-uncle-once comments."

Here are some things to consider as you assess an existing group, or options to consider if you have a role in creating one.

There are plenty of “yes, but” rules for any group. For example, someone whose child is getting married in a month may be willing to critique others’ work, but isn’t writing new chapters themselves. The group agrees this is fine, but someone who “never has time to finish a chapter” may be asked to take a break from the group until their writing resumes.

I’ve never heard of a critique group whose members read aloud. To me, that’s more like a shared reading group. I put a lot of effort into reviewing a project, and need to read it in advance.

Finally, are there parameters to ask someone to leave the group? If guidelines are established in advance, discussions will be smoother. To me, people would generally only be asked to stop attending if they were rude or didn’t read material. Your group may want different guidance.

This is a lot to digest. Much easier to be invited into an existing group! However, we writers work by ourselves, and I think it's worth the effort to create an environment for constructive criticism and encouragement. The whole is greater than the sum of the parts.
*            *             *
To learn more about Elaine or her writing, visit www.elaineorr.com.
Posted by Elaine L. Orr at 7:56 PM