Sisters in Crime brings together authors, most of whom write books and short stories. The Speed City Chapter decided, about a year ago, to tackle writing a play to submit to IndyFringe, an Indianapolis festival that features several plays, each about forty-five minutes long. Deadbeat debuted August 16th.

Chapter President Michael Dabney noted that, “Some 15 months ago, this play wasn't on any of our radars… Although not everyone took part in the writing, this truly has been a chapter project because the writing and storytelling were only the first steps. Many [members] helped with logistics, legal, marketing and promotions, graphics and designs, and in providing props. And without help in all those areas (and more), this production could never have seen the light of day.”

Deadbeat had many writing cooks, working largely through the chapter's critique group, but they knew how to focus on the product and work as a team. The play was featured in the Indianapolis Star on August 17, 2017. 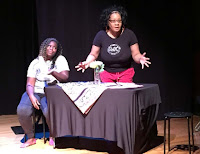 Just as book authors are asked how they came up with an idea, that question is asked about Deadbeat. Brigitte Kephart described their writing starting point -- two women standing over the body of the husband of one of them, trying to figure out what to do with the corpse. (Photo features Abigail (Gabrielle Patterson at right) and Celeste (Alicia Sims). Provided by Michael Dabney.)

What dominates Deadbeat, however, is its comedic feel. The darker edge and harsh truths fold in easily," Kephart said.