Freedom to Read and Express

There are many things to think about on Independence Day--whether it's July 4th in the U.S. or Bastille Day in France, or various days in other countries. Each year I think about our freedom to not only read but publish anything we want to.  (The seven especially bad words aside on television.) 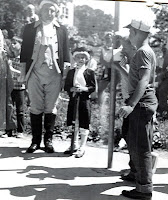 Each year in Garrett Park, Maryland there was a parade and an annual essay contest.  I won two years, until I got into a different age group and there was more competition. The parade also had a costume contest, and one of my brothers won for best costume one year. (Can't say which one, he'll get back at me.)

Those annual rituals made 4th of July more than an occasion for fireworks. Each year there was a theme, and we talked about it.  One year we celebrated the admission of Alaska and Hawaii to the union, which is why my sister was wearing a bathing suit in this one--Hawaiian beaches, not Alaskan tundra. I only have one sister, so no need to guess, for those who know her.

Another town I lived in also had parades. Coincidentally, Takoma Park, Maryland was the nation's first nuclear free zone and Garrett Park was the second. Very interesting places to live. The picture at right shows one of my brothers introducing a niece and nephew to the 4th of July Parade in Takoma Park in 1993.

The biggest takeaway for them was the Shriners Club's clowns in their small cars. Not exactly the most patriotic entry (though a good lesson in charitable giving), but memorable.