The Jersey Shore is Back

There's nothing like sun and warm weather at the beach on Memorial Day Weekend. Unless it's cloudy and cool at the New Jersey shore in 2013. Why is this good news? Because the Jersey shore is back! Not an October hurricane or wet long weekend can dampen spirits. There's plenty of cotton candy and salt water taffy to go around.

If some things are missing, they will turn up later. Seaside Heights, whose roller 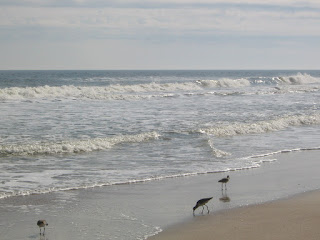 coaster landed in the Atlantic surf, plans to have eighteen rides open later in the season.

The Jolie Gentil mysteries did not want to ignore Hurricane Sandy, whose vicious path took and altered lives in the region. However, the  fifth book, Trouble on the Doorstep, chose to deal with recovery more than the storm itself.

The fictional Ocean Alley was placed near Asbury Park, which is about 80 miles north of where Sandy came ashore. Thus, it can deal with repairs to a senior living complex rather than rebuilding, and the food pantry Jolie runs can restock freezers rather than having to find ways for people to buy new freezers. That's a big difference.

While things were not as damaged in Ocean Alley as towns further south, some things are the same. Retired Dr. Welby volunteered to give vaccinations and help people get new prescriptions, and when Jolie and friends run a food pantry fundraiser half of  the proceeds go to the Red Cross. In other words, the spirit of giving survived the storm.  That's New Jersey. People helping people.