Living in the Midwest, a 180 mile drive is not the time-consuming event it can be on the crowded east coast, so when my friend Leigh Michaels was the featured speaker at the Kentucky Romance Writers conference in Lexington on St. Patrick's Day I drove down to hear her presentation, Writing Between the Sexes.  I had seen portions of it, but never the all-day class, and it was a great chance to think about not only how differently men and women think/act, but how that can be expressed (or mis-expressed) in characters.  Part of the workshop presented several samples of writing and attendees considered whether a woman or man had written the scene.  (One clue -- if a female character spent a lot of time thinking about her body's curve, a man probably wrote it!) 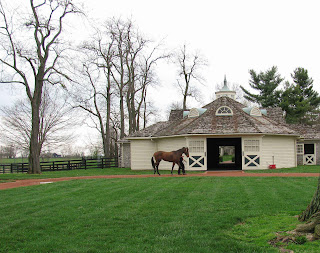 In addition to the workshop, the women who attended were incredibly forthcoming about what has worked for them in marketing their books, especially e-books.  While many have been traditionally published, more than half were also "indie publishers," as I am.  Later this week I will do a post that lists some of their blogs -- always good to share knowledge.

As interesting as the conference were tours Friday afternoon.  Though I have visited farms with horses and my high school was in a cow pasture (yes, Bethesda, Maryland had cow pastures way back when) I had never been to a large horse farm.  Three Chimneys is near Lexington, just outside the idyllic town of Midway. We toured part of its Stallion Division and had an up close and personal view of carefully monitored mating activity.

One of its most well known current residents is Big Brown, who won the Kentucky Derby and the Preakness.  The stallions were used to being on display, as they took little notice of our group and went back to munching hay.  The most nonplussed was Exchange Rate, the only grey horse in the group.  His photo is taken through the bars -- we humans (touring humans) cannot get too close to the horses.
Posted by Elaine L. Orr at 2:58 PM