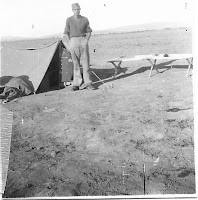 I am still building ideas for the fourth book in the Jolie Gentil cozy mystery series.  In  the meantime, I decided to work on a book that will contain my father's poetry and some of the letters he wrote during World War II.  I don't know that the book will go beyond family and friends -- one of the many advantages of on-demand publishing.

While I had seen some of the letters he wrote my mom, whom he met when home on leave near the end of the war, these are some he wrote to my aunt and her family from 1943 to 1945. These just came to us from a cousin, after my aunt died.  A true gift.

Miles Orr was in the Army Air Corps in Africa and Italy. The letters, of course, cannot talk about what his bomb squad did or where they were. Unlike today's military, who have media "embedded" with them, in World War II everyone knew the phrase "loose lips sink ships."

It's interesting to read about the welder rigging a machine to make ice cream, or that he liked a book my aunt sent him. He could have written either of those things after a difficult battle or a near miss in the sky. To those at home, it sounds as if his biggest concern was the shower they rigged up that day.  (He characterized the single shower as a welcome change from bathing hit or miss, mostly miss.) The photo shows him in front of his pup tent in North Africa.  Pretty basic "quarters," aren't they?
Posted by Elaine L. Orr at 6:20 PM